Our microwave is possessed by Satan.

Several months ago (wow, it's embarrassing to admit that it's been that long), our microwave stopped working properly. It didn't stop working...not all the time, at least...but it began to display a troubling pattern of sporadic non-functioning. Sometimes, it would run for a few seconds, then just shut off. Other times, it would keep running, but it would beep continuously, sometimes even past the moment when we frantically yanked the plug from the wall. From time to time, it would not actually do much in the way of heating up food, but it would continue to make noise and produce light for as long as the timer was set. Several other permutations of non-working developed, but as long as we verbally and aggressively threatened to replace it, the microwave mostly did its job, even if it took half a dozen tries to partially heat a muffin. Then, I made a terrifying discovery.

The microwave will work perfectly - and I mean perfectly: the expected amount of heat is produced in the anticipated amount of time, with the stop and start buttons functioning correctly - as long as we punch in the time six minutes and sixty-six seconds. I tried it out on a whim, and was strangely unsurprised when it worked. This bastardly microwave has seemed to be taunting us for months, intermittently operating as a microwave should and refusing to do anything but beep incessantly. Jerk microwave. We've started heating up your food in that sucker, and even still...even with you squirming in your chair and furiously pounding your fat little fists on your tray...we haven't gotten a new one. Why, you might wonder, do we keep an essentially non-functional appliance on hand that may actually be possessed by some demonic presence when $45.00 and twenty minutes of our time would easily provide us with something new, usable, and...well, not possessed by some demonic presence.

Simple. We just don't give enough of a crap. Hudson, when you almost never get more than three hours of sleep at a time (and when three hours is a luxuriously long stretch of time to sleep), then you either spend eight hours by yourself chasing an increasingly mobile and energetic not-quite-yet-toddler - or work an eight hour day then come home to said not-yet-toddler and a cranky, overtired spouse, THEN you can decide how much of a crap it is worth caring about a microwave that usually does close to nothing when there is any alternative to replacing it (even if that alternative is "suck it up and eat it cold"). The desired amount, you will find, is not a lot.

You have just exploded in the last few weeks. Your hair started growing in tufty, wavy tendrils around over ears. Every now and then, I catch you turning your hands over and over and studying the movement of your chubby fingers. You can more or less crawl backwards, and smoothly transition from sitting to scooting and back to sitting again, though I'm not sure if you are quite aware that crawling is something that can move you forwards, too. You can stand leaning on a table or chair or person, or holding someone's hands, and bounce in place with furious strength. We were scared for a few weeks that you weren't interested in solid food at all, but then we realized that you were just sick of us feeding you; you want to do it yourself, and when you do, you'll eat pretty much whatever we put in front of you. You can pick up tiny puffs and beans and pop them into your mouth, and at least 60% of what goes in there stays in. You babble the most confident, assertive sounds that have ever not been words, and I had a dream last night about you suddenly speaking; I don't remember what you said in the dream, but I know it was two words together, and I almost cried I was so happy to hear them.

The fact that you are stomping, scootching, rambling, and yowling your way towards words is a source of no small amazement to me. Completely barring the gross reality that you nearly didn't make it to a point where you were making sounds, it still catches me off-guard that you are so rapidly and obviously growing into a little person. It clearly takes a lot of your energy, and I hate to admit it drains a great deal of mine. There are days when we go out and do nothing but go to the grocery store, and I am too tired to even return phone calls; even on the best days, your Dad and I end up in puddles on the couch. We can justify the effort it takes to go out for a meal, a drink, a snack, or even a walk when it has a tangible result. We ate! We drank! We felt more sane! You were happily occupied for any length of time! Result! Shopping trips have become somewhat trickier to justify, as you can't yet move yourself around as much as you want to, so you occasionally get antsy...or alternately, you require us to dance and leap around like crazy people in places where dancing and leaping are generally not done. Like the underwear section at Target. Or the dairy section at the grocery store. Or standing at any intersection waiting for a walk signal.

Buying a microwave, aside from being a logistical challenge for one person attempting it alone and an excruciatingly boring way to spend time together as a family, is just not worth the time it would take. I would rather stare off into space, glassy-eyed, for forty minutes while you nap than take that time to run to Target and buy a microwave that is not fueled by some demonic presence. Sometimes you don't give us a choice, and we have to spend potential shopping time letting you hurl plastic cups across the floor, or hover with a hand behind your butt as you bounce gleefully in place standing next to the window. Satan may have possessed our microwave, but you have utterly, unconditionally commandeered our time.
Posted by SarahKat! at 9:36 AM No comments: 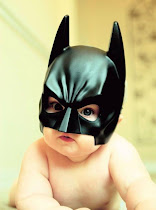